Orchha is one of India’s best kept secrets. This gorgeous town located in Madhya Pradesh hearkens back to the royal grandeur that can be found on an Orchha visit. The town feels really rural compared to the bustling cities of Delhi or Mumbai and also doesn’t feel as touristy as places like Goa or Agra.

The town, founded in the 1500s by the first king of Orchha, features many beautiful architectural wonders such as the Fort of Orchha, the Chaturbhuj Temple and the Raja Mahal.

Located on the Betwa River, Orchha is well worth the trip out of the more populous areas of India to explore rural life. I was lucky enough to stumble upon this regional town as part of a wonderful tour from Delhi to Kathmandu run by Intrepid Travel.

Disclosure:  This post may contain affiliate links. I only recommend products or services I would use myself and all opinions expressed here are my own. If you use these links to buy something, I may earn a commission at no extra cost to you. Thanks for your continued support.

How to get to Orchha

Orchha is a small town and has no airport nearby. The closest domestic airport is in Gwalior around 140 kilometres from Orchha where you can fly in and out of Mumbai. However, there are not many flight options or airlines servicing this airport, so perhaps consider some alternatives.

The nearest International Airport is even further away – around 300 kilometres, but does have more flight options from all around India as well as from nearby international ports such as Singapore. Still, 300 kilometres is a long way away from Orchha so I’d say flying is not the most preferable option.

Driving in India can be a hairy experience, so I wouldn’t recommend this unless you feel comfortable on the crazy roads here. Still, a drive from New Delhi will take just over eight hours going via Agra. A good route might be to travel the four hours from Delhi to Agra, see the Taj Mahal for a night and then continue on for the second half of the drive to visit Orchha.

From Jaipur, the distance is around the same as from Delhi, driving via Bharatpur or the Palpur-Kuno Wildlife Sanctuary.

Though it might seem daunting, the train is the best way to get to Orchha. From New Delhi, you’ll need to take the train towards Chennai Central for 5 hours and 40 minutes (3 stops), before alighting at Jhansi. Then, change trains towards Prayagraj Junction (Allahabad) and travel for about 14 minutes before arriving at Orchha.

From Jaipur, you’ll need to get the train into Agra, before changing onto the train bound for Jhansi.

Where to stay when you visit Orchha?

Because Orchha is very rural, there are not as many options for accommodation, however the options are really well priced – definitely a bonus for the budget.

The Orchha Palace and Convention Centre is probably the best in terms of mid-range and luxury accommodation in the heart of Orchha town and there are plenty of smaller three star options that go for a very good rate.

Things to do in Orchha

You can’t visit Orchha without paying a visit to the incredible fort complex of Orchha. Built by the first king of Orchha, Rudra Pratap Singh, this beautiful complex was constructed in the 1500s and still looks impressive today. Entry to the fort costs 250 INR for foreigners (around $4.50 AUD), an additional 25 INR for a camera and a further 200 for a video camera. For Indians, entry costs a mere 10 INR.

From the fort’s main courtyard, several palaces are located – Raja Mahal which is the King’s Palace and Sheesh Mahal which is now a hotel. There is also a palace garden and temples that run off from the main sections of the fort.

The sandy coloured stones and beautiful architecture are incredibly well preserved here as you walk through the palace at your own pace soaking in the sights. 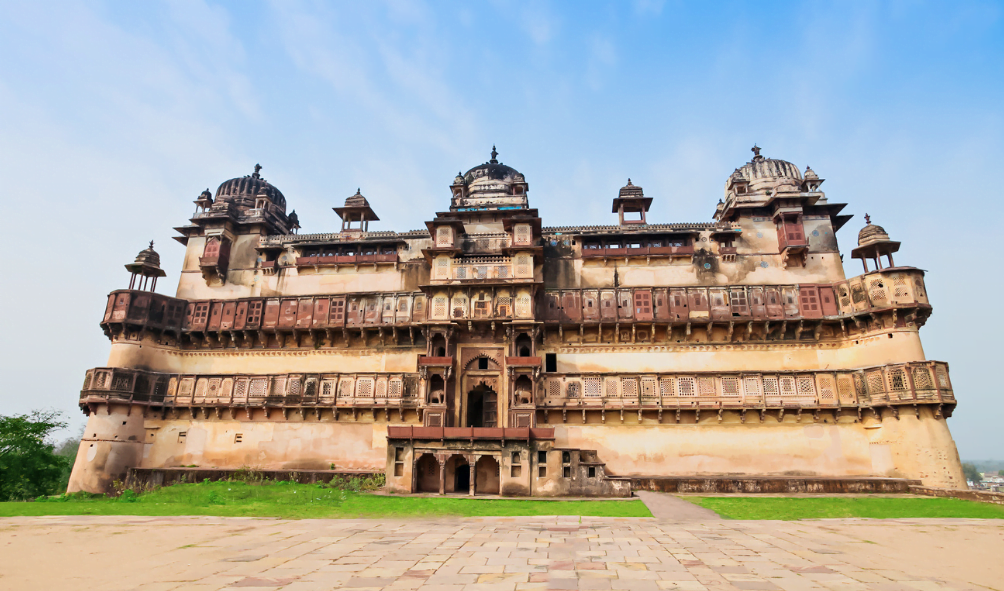 The wonderous structure of Chaturbhuj Temple is immediately recognisable because of its unique tower – one of the tallest in Indian Hindu temples. A temple recognising Vishnu and Rama, Chaturbhuj is located close to the Orchha Fort and it is possible to see both in the same day.

Entry to Chaturbhuj is completely free and open for visitors daily. Morning visits are from 8 am – 12:30 pm and evening visits are between the hours of 5pm and 10pm.

Ram Raja Temple is located on the main street of Orchha and is a sacred Hindu pilgrimage seeing over 650,000 domestic tourists a year. This temple is unique as it is the only temple in all of India where Lord Rama is worshipped as a King. There’s even temple guards there – just like at Buckingham Palace (but with a Hindu twist!).

If you are able to, viewing a worship ceremony at Ram Raje Temple is a brightly coloured, vibrant experience that definitely gives a great insight into the religious beliefs of the country.

Before you ask, I didn’t quite make it into a Bollywood style wedding whilst I was in India. I’m as disappointed as you are at that BUT I did happen to crash a rather modest wedding (quite accidentally) and a medical school reunion (less accidentally) all in the one night in Orchha.

Now Orchha isn’t really the party capital of India. It’s a quiet, rural town with a lovely little main street with some market stalls. That said, there’s some pretty impressive surrounds in the Raja Mahal and Orchha Palace that give you a sense of the grandeur of days gone by.

The wedding I happened upon by complete accident happened to take place at my hostel. It was a strange choice for a wedding location because the entire accommodation area was a sort of glamping type arrangement in half tents half cabins, but nonetheless there it was. Coming back to my abode after a dinner of dahl and samosa and a visit to the local temple, I was stopped by a couple of local guys who told our group to come up the hill to a wedding that was taking place.

Since the music was pumping, there wasn’t much chance of sleeping anyway so up we went. Things were starting to wind down by the time I made it up there and our presence earned a mixed reception from the guests – the younger guests were thrilled to have us there and the older generations were less so. We took our leave and headed back to camp with a few beers.

An hour or so later when the wedding revellers had well and truly crashed out, I realised that there was music playing around the corner at a different event. Again, it was so loud that there was no chance of getting to sleep so a few of our tour group headed over to the hotel on the corner to see what was happening.

This is where the fun began! A HUGE party was happening – much bigger than the wedding. There was a stage, there was a smorgasbord of food and alcohol and there were heaps of people.

A man walked over and we prepared to be told to leave, but after a brief conversation with the tall English guy in my tour they realised that they’d both served in the British Army and all of a sudden we were welcomed in with open arms. We were pulled up on the stage, danced, were introduced to the doctors’ children and even helped MC. Just goes to show you that the British Army can open doors for you that you’d never imagine!

Pin to save it for later!

Exploring The Incredible Architecture Of The Taj Mahal In Agra, India

Learn all about travelling to every corner of the earth to see all of the New Seven Wonders of the World as well as the Great Pyramid at Giza.
Read More

A Reflective Trip To Beautiful Goa In Southern India