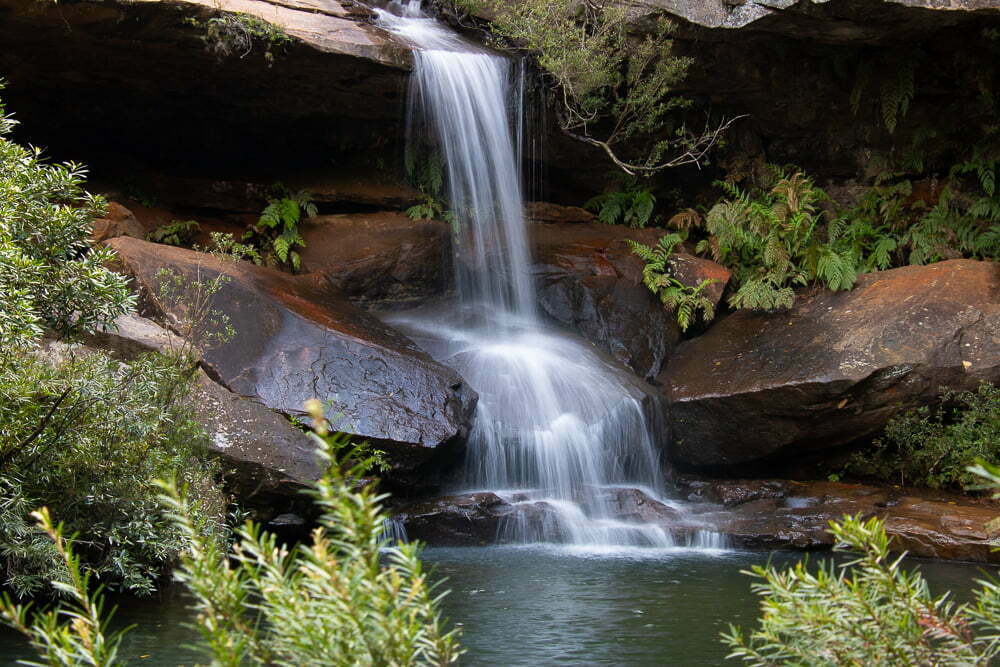 I’ve lived in Sydney for nearly four years now and I’ve loved exploring the many national parks that New South Wales has to offer. A new favourite national park that I’ve only just discovered is the beautiful Ku-rin-gai Chase National Park which is a huge expanse of land that looks over West Head. It is a perfect day trip from Sydney, although of course there is much to explore here if you wished to stay longer.

In this beautiful example of Australia’s coastal bushland, there are many things to do and see. There are incredible West Head walking tracks that are often listed in the best secret Sydney walks to embark on. There is a proud indigenous heritage and history here where cave paintings and drawings can be viewed. And there are waterfalls that you can swim under!

There are also exceptional scenic drives suitable for cars or bike riding through the Akuna Bay region. If sailing is more your forte, then you’ll be pleased to note that boats sail into the Akuna Bay harbour area and around the surrounding islands, allowing you to see the spectacular scenery from the water.

In my experience and in no particular order, here are my top five activities to ensure you enjoy your day in Ku-rin-gai Chase National Park.

Disclosure:  This post may contain affiliate links. I only recommend products or services I would use myself and all opinions expressed here are my own. If you use these links to buy something, I may earn a commission at no extra cost to you. Thanks for your continued support. 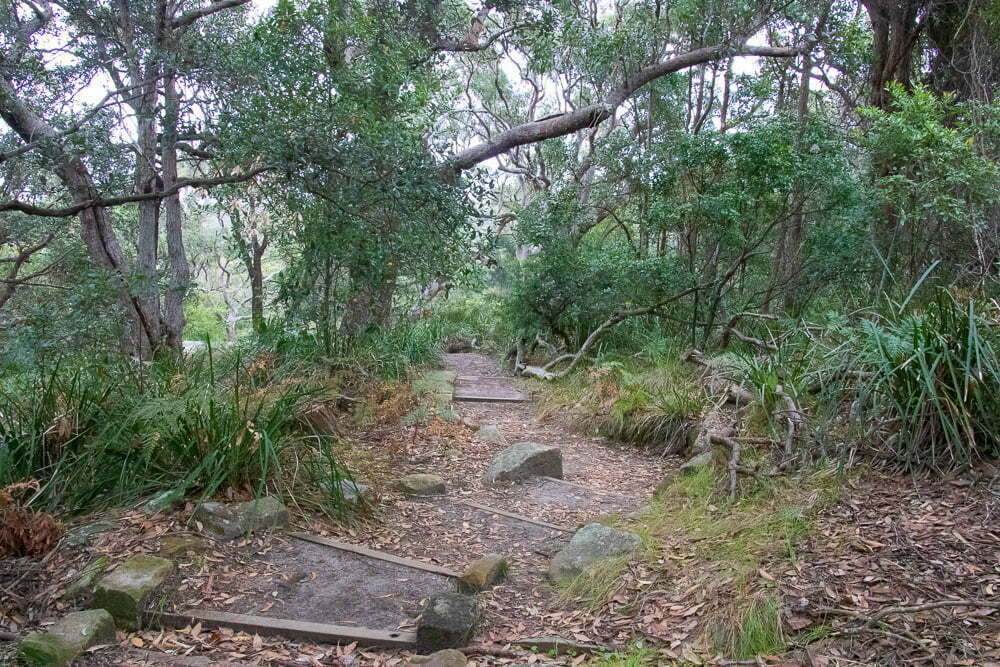 The Akuna Bay scenic drive through the park is utterly breathtaking. A steep descent into the valley offers sneaky views of the waterfront through the trees where sailboats rest in the harbour waiting to be taken out on the open water. Fishermen, too, can be seen setting up their rods next to their folding chairs, preparing for a hopefully successful day of plentiful catches.

There are also a number of Akuna Bay and West Head walking tracks for exploring around the area and this part of the park is also perfect for picnicking – just be sure to take your rubbish home so as not to damage the natural environment around you. 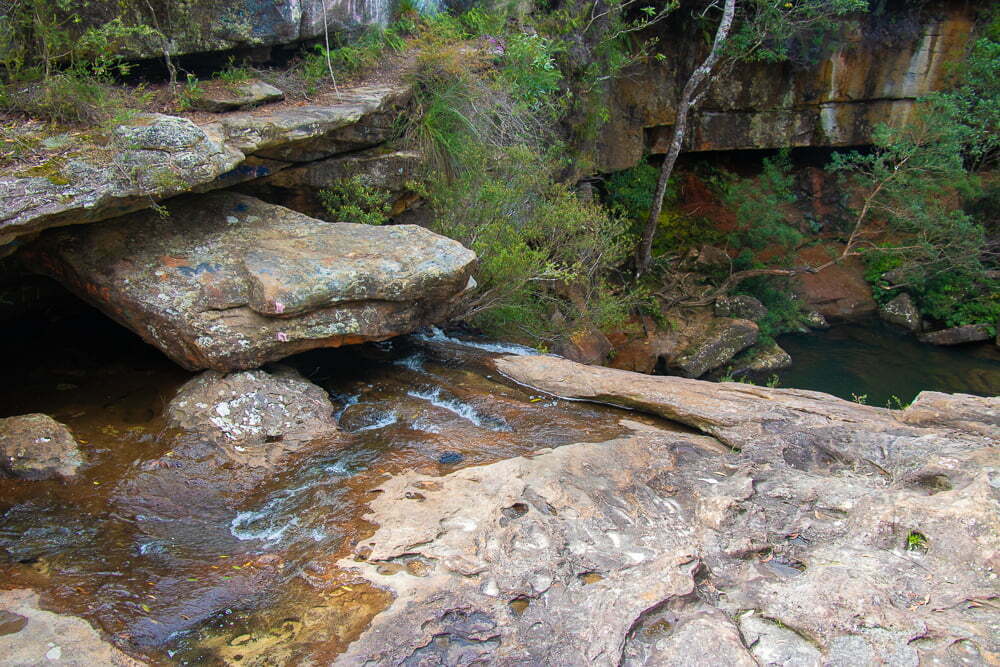 2. Take in the view from West Head Lookout

West Head Lookout provides superb coastal views over Pittwater and the northernmost tip of Sydney’s Northern Beaches, Palm Beach. Barranjoey Lighthouse can be spied from a distance at the very tip of the slender spit of land, marking the end of the stretch of beach that is famous for being the scene of Summer Bay, where Australian soap Home & Away is filmed.

From West Head Lookout, you’ll also be able to see Lion Island located in solitary confinement out in the bay. It was so-called because it reminded the discoverers of the Sphinx, lying in guard for the Pyramids of Egypt. It might be a bit of a long bow to draw, but with a bit of imagination, you can see the resemblance.

The Lookout is also home to a number of West Head walking tracks, including one of Sydney’s best kept secret beaches, Resolute Beach West Head. These beaches are not patrolled and are pristine, so please ensure that any food or rubbish items are taken home with you. 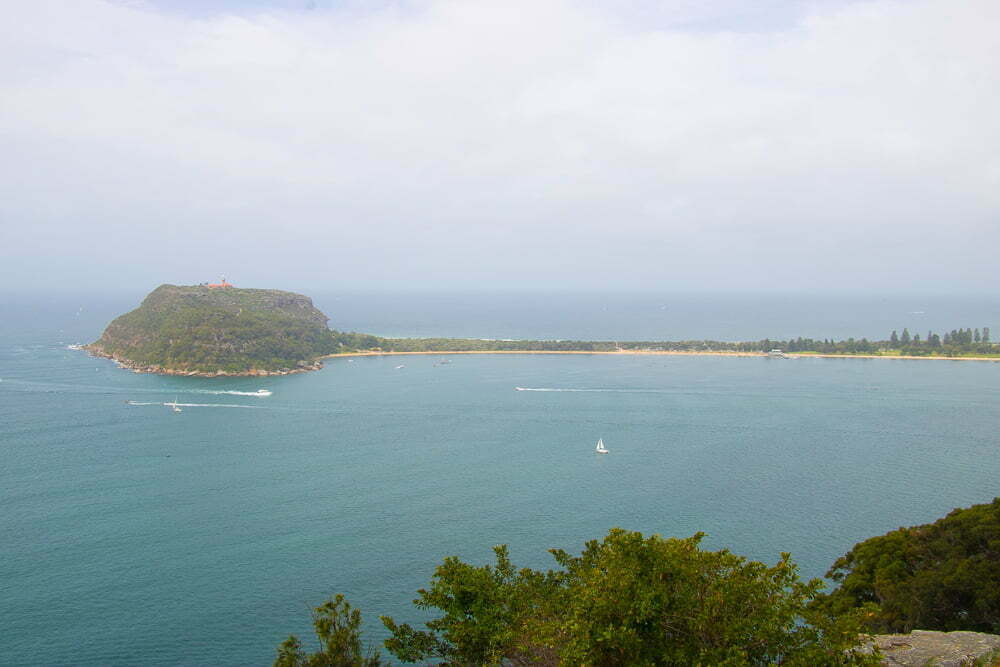 Ku-rin-gai Chase National Park is home to indigenous and first nations heritage trails that allow you to view cave paintings and handprints from over 2000 years ago. The Red Hands Cave Track, accessible from West Head Lookout offers the unique opportunity to bush walk through the Australian wilderness to a cave that features artwork by the original inhabitants of the land.

Keep an eye out for the ochre-coloured handprints on the rock that the Red Hands Cave is named after. It is incredible to think that you can be standing in front of handprints that have such amazing history attached. It’s a totally unique experience and definitely one of the best things to do in Ku-rin-gai Chase National Park. 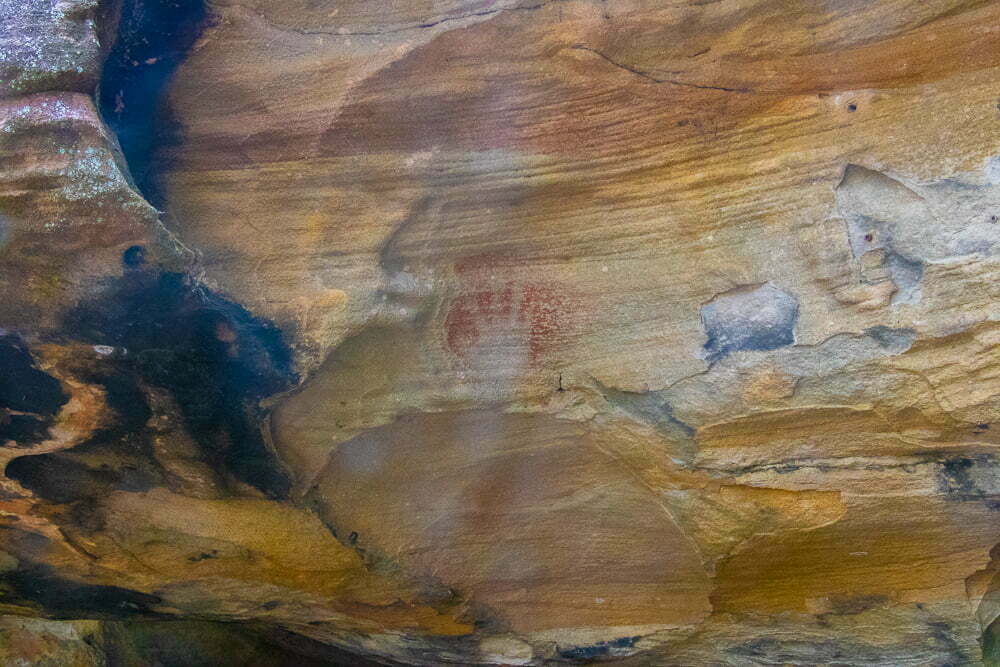 Ku-rin-gai Chase National Park walking tracks are some of the best of any of Sydney’s National Parks but have the added benefit of being far less crowded than any you’ll find in the Blue Mountains or in the Royal National Park. As the area is a lot less busy and a lot more remote, it is important to ensure that you are prepared if you’re going to embark on a hike as the Australian bush can be unforgiving on unprepared tourists.

Some of the park’s most well-known tracks are the Flint and Steel Track, the America Bay Walking track, the Red Hands Cave Track, the Resolute Beach Track amongst others. The number of Ku-rin-gai walks seems endless, though and there’s always a new track to explore. 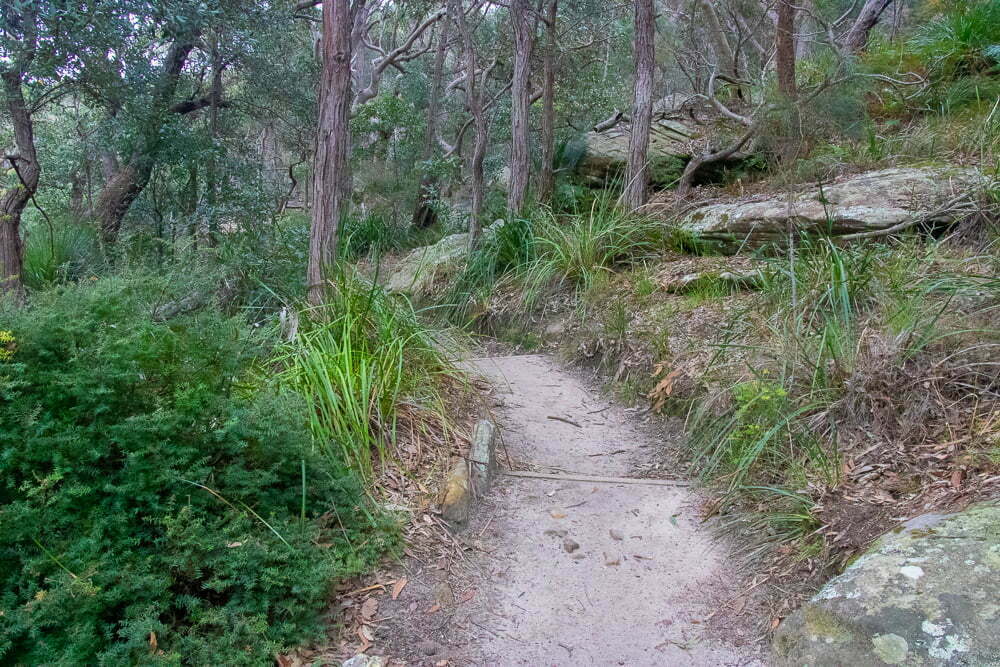 I’m always a sucker for a waterfall and the serenity of the secluded Upper Gledhill Falls is perfect for a bit of respite after a long hike. Upper Gledhill Falls is deceptively hidden despite being a mere stone’s throw from the main road into the park. To look from the top of the waterfall down is possible for any ages and abilities, but the real joy comes from clambering down the rock face into the base of the waterfall for a swim.

The journey down to the swimming hole is not an easy one, though, and there is no path. Simply find a way down through the rocks, being careful to maintain balance and sturdiness by taking your time.

Once at the base of the waterfall, you can barely hear the sounds of cars on the road above at all. The pool looks green and inviting, there are rocks and little sand banks for a small picnic and most likely, you’ll have the spot to yourself as not many locals even go here. When I’ve visited, the maximum I’ve ever seen is about 3 other people. 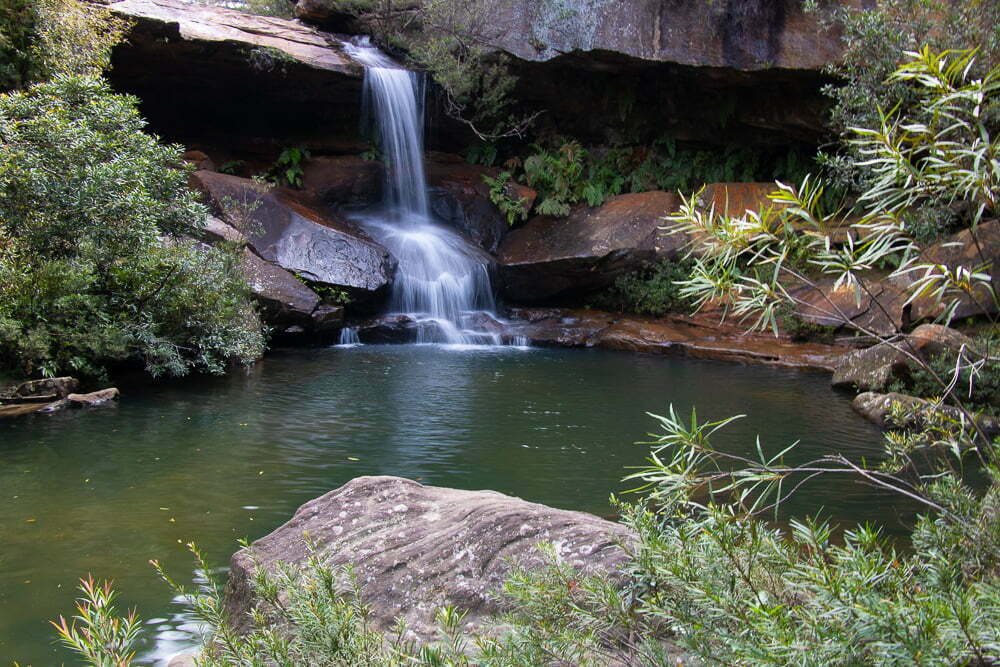 Getting to Ku-rin-gai Chase National Park

Ku-rin-gai Chase National Park isn’t the most accessible of Sydney’s many national parks so if you have access to a car, I definitely recommend driving so that you can hop from place to place and maximise your day in the park.

There are certain sections of the park that can be accessed via public transport, but it won’t be possible to take all my suggestions if you don’t have a car handy. Check out the full information over on the NSW National Parks site.

It is possible to catch the ferry over from Palm Beach, which will give you access to Resolute Beach and West Head Lookout if you’re game to walk up there. From West Head Lookout, the Red Hands Cave Track is only a reasonably short walk away, too. Akuna Bay and Upper Gledhill Falls are likely out of reach, though, as they’re much further away.

Car access to most national parks in New South Wales comes with a cost which goes back into preserving and ensuring the parks are looked after.

Ku-rin-gai Chase National Park costs $12 AUD to visit by car. If you’re a national park fan, like me and you’re based in Australia you may also want to check out the NSW National Parks Pass for $65 AUD. It allows you entry into any NSW national park with the exception of the Snowy Mountains and I’ve definitely gotten my money’s worth within the last 12 months.

Where to stay near Ku-ring-gai Chase National Park? 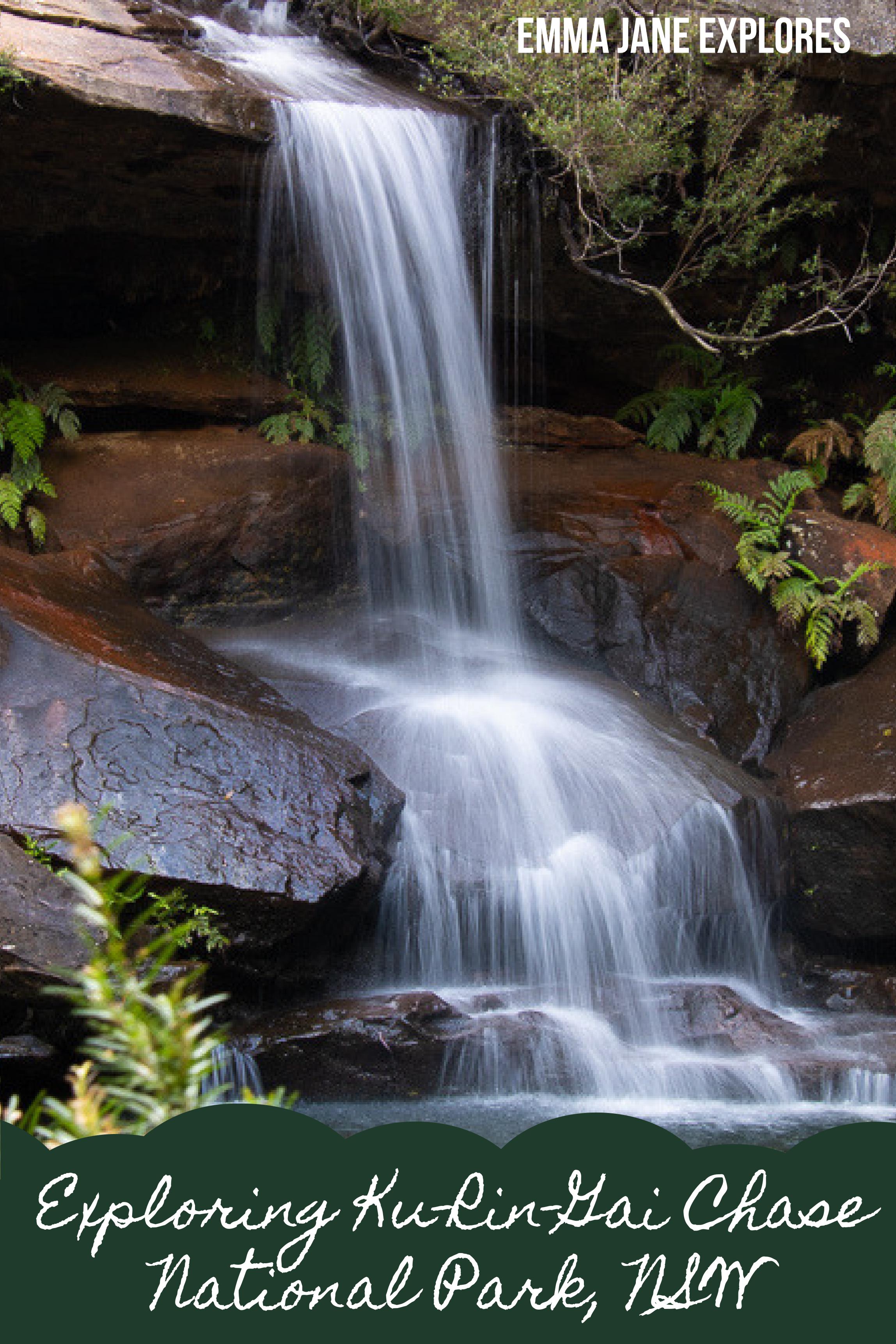 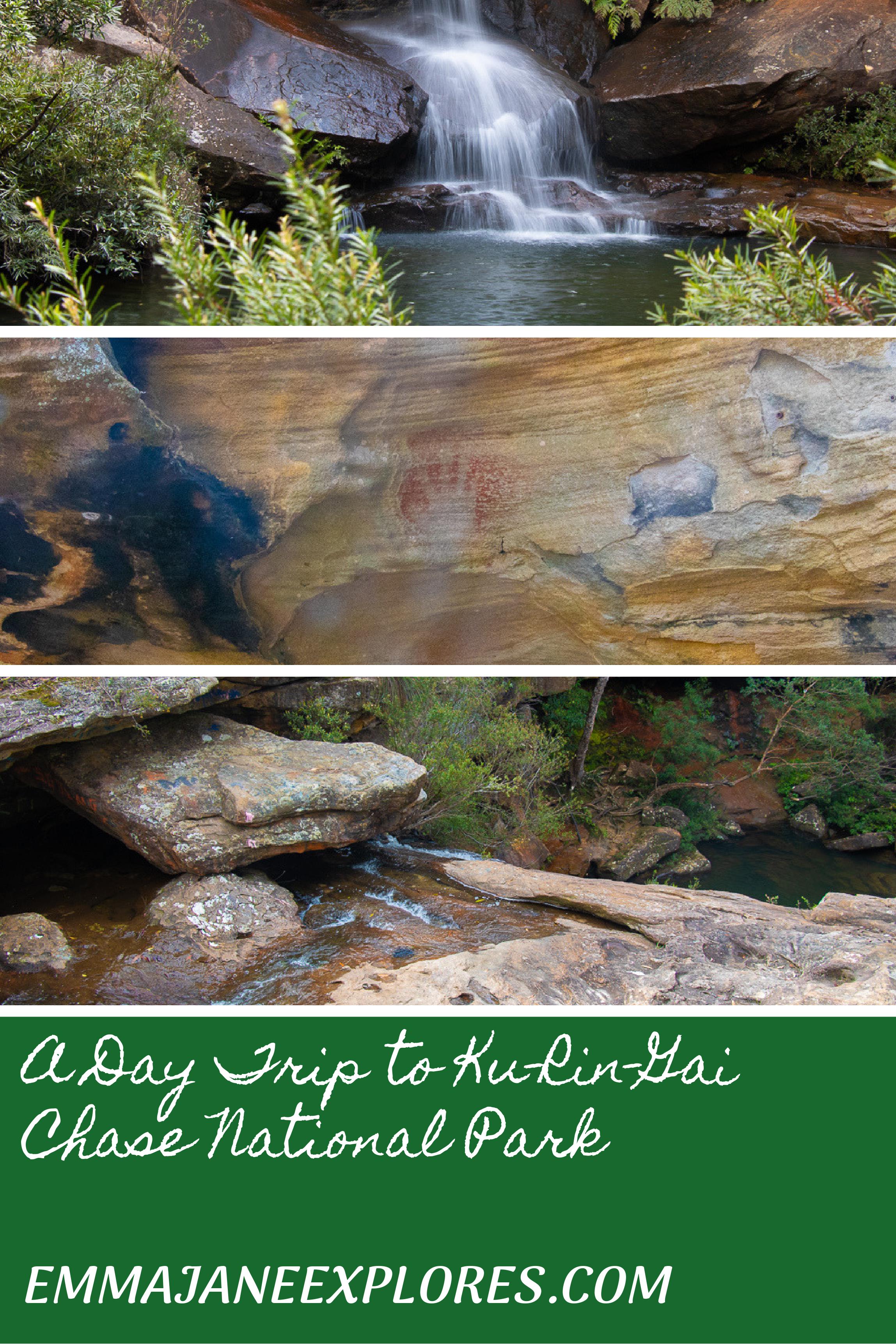 Where To Find Sydney’s Most Beautiful Christmas Decorations

6 Spectacular Things To Do In The Southern Highlands

The Best Waterfalls To Visit Near Sydney

The Best City Breaks In Australia

The Most Unique And Special Places To Celebrate Christmas Abroad

The ultimate guide to Sydney, Australia

The Best Day Trips from Sydney